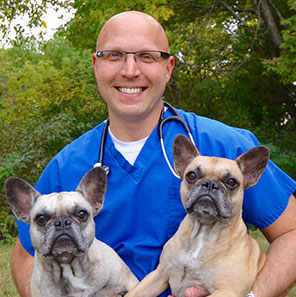 Dr. Brett Wasik graduated from the University of Illinois, College of Veterinary Medicine in 2003. After graduation he completed a one-year rotating internship in small animal medicine and surgery at Veterinary Medical & Surgical Group in Ventura, California. He was in private practice in the Chicago suburbs for a short time following his internship prior to completing a small animal internal medicine residency at VCA Aurora Animal Hospital from 2005-2008. He became board certified in small animal internal medicine in 2008. Dr. Wasik was a staff internist at VCA Animal Diagnostic Clinic in Dallas, Texas from 2008-2011. He became a consultant for Veterinary Information Network (VIN) and Antech Diagnostics in 2011 focusing on canine/feline internal medicine and endocrinology. He has also served as an ultrasound instructor for Sound Technology in Irving, TX. Dr. Wasik completed an endocrinology post-doc appointment at UC-Davis in California with Dr. Chen Gilor in the fall of 2018, working on insulin formulations in cats. During that time he also edited and updated chapters on hypercalcemia and hyperparathyrodism for the future edition of the “5-Minute Veterinary Consult Canine and Feline” textbook and co-authored a chapter with Chen Gilor in the upcoming version of the “Current Veterinary Therapy” textbook on monitoring insulin therapy in dogs and cats. He remains an active endocrinology and canine internal medicine consultant for VIN and small animal internal medicine consultant for Antech Diagnostics.

Dr. Wasik’s special interests include canine and feline endocrinology, particularly adrenal focused diseases such as hyperadrenocorticism, hypoadrenocorticism, pheochromocytoma, and hyperaldosteronism. Outside of veterinary medicine, Dr. Wasik enjoys traveling as much as possible, scuba diving, getting away to Grand Lake in Oklahoma and professional sports such as NFL football and NHL hockey…Go Packers and Go Blackhawks! He spends his remaining free time with his two “atopic” French bulldogs Ruby and Stella.

1. Update on SARDS in Dogs, an Internist Perspective
2. Feline Hyperaldosteronism – A Literal “Pain in the Neck” if You’re a Cat!
3. Updates on Canine Hyperadrenocorticism – “To Pre-Pill or not to Pre-Pill…that is the Question?”
4. Canine and Feline Insulin Therapy including newer options like degludec and glargine
5. The Incidental Adrenal Mass!
6. Canine TSH Monitoring for my Hyperthyroid Feline…What Gives?
7. Treating Canine Hypoadrenocorticism – 2020
8. Atypical Cushings